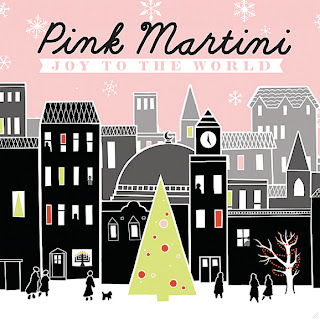 
What a joy!!  I just picked the CD up yesterday at our Local Starbucks!

This eclectic band or "little orchestra" has done it again!

The album has a true excitement and a passion for the holiday season without being a  rehash of the "tried and true" usual fare of Christmas Albums.

Each track is fresh and thoughtful in it's approach and tone  with excellent structure, arrangements and musicianship.

If you only buy one holiday album this year- pick this one!!

6. Little Drummer Boy
… timeless with a modern take on the great beat!!

8. Do You Hear What I Hear?
… I had no idea it was written during the Cuban Missile Crisis-
great back beat


10. We Three Kings
… modern take on the rhythms

"Joy To The World is a festive, nondenominational holiday album with music from around the globe.

“There are 14 songs on Joy to the World,” says Thomas Lauderdale, “including well-known traditional holiday songs like Irving Berlin’s “White Christmas”…sung by China Forbes in English and by the incredible Saori Yuki… the Barbra Streisand of Japan… in Japanese.
With the Pacific Youth Choir and the handbell choir Bells of the Cascades, we recorded “Shchedryk,” known in English-speaking countries as “Carol of the Bells,” with the original Ukrainian text which tells of a lark flying into the house at the start of a new year, thus bringing good fortune.

We recorded a Hebrew prayer “Elohai N’tzor” with Ida Rae Cahana and Ari Shapiro and Patricia Costa Kim. (Ida Rae Cahana was for many years the canter at Central Synagogue in New York City and now lives in Portland… Ari Shapiro is the NPR White House correspondent… and accordionist Patricia Costa Kim was just named director of education at Experience Music Project in Seattle, but is also known by millions on YouTube as the keyboardist bandleader of Sonseed and their Christian ska song “Jesus is a friend of mine”).

There’s a Chinese New Year song from 1946, a Felainspired version of “We Three kings,” a song in Ladino (the intersection of Spanish and Hebrew), “Silent Night” in the original German, as well as a verse in Arabic and another in English.

The album ends with a samba parade of “Auld Lang Syne” with choruses in English, Arabic and French over the incredible percussion of the Lions of Batucada.”

Lauderdale notes, “I love the holidays and all the music that goes with it. We strove to make an inclusive and non-denominational album that could be played anywhere in the world.” "